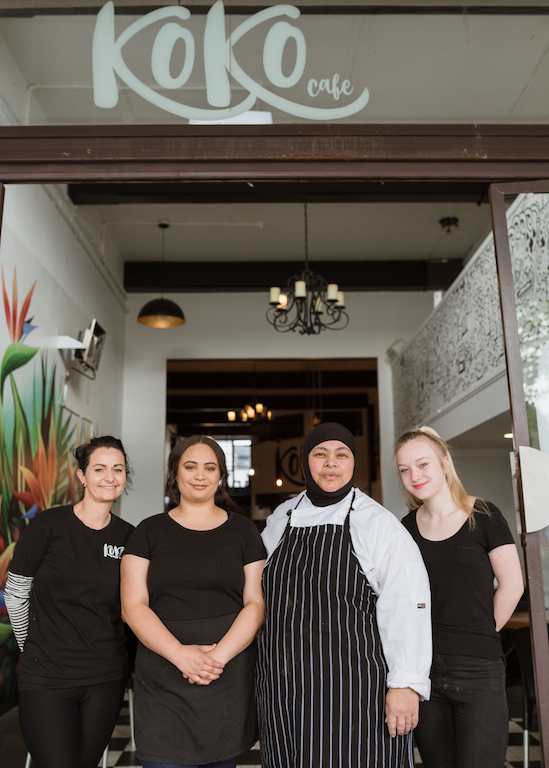 Koko Cafe neatly mixes old and new in Hamilton’s southend: the new is a stunning Jeremy Shirley mural in the entranceway, a glorious splash of tropical colour to brighten your day, and the old is the building’s original black and white tiled flooring that leads into the spacious interior.

In recent times, Koko’s had a new owner, Cherylene Fatupaito, a new name, and a refresh. While Cherylene wants to move the business forward, she’s respectful of its proud hospitality history and its distinctive location. And she knows the cafe well, having worked there earlier in her career.

“It’s all fallen into place,” she says. “It needed a new start. I’ve dreamed big goals; there have been a lot of sacrifices and hard work to get here. We’ve really started from scratch.”

Koko was formerly Metropolis Caffe, founded in 1991 by brother and sister team Robert and Deborah Nudds. Everyone has a Metropolis memory; it was the go-to place for good coffee, vibrant food and tonnes of atmosphere. It led the city’s cafe culture and the southend’s ‘eat street’ spirit, and many others followed.

As well as its good food and beverages, it had the enviable location of a Heritage New Zealand-listed building that was once the premises of Paul’s Book Arcade, a city literary legend.

Robert and Deborah Nudds eventually sold Metropolis, and Cherylene worked for subsequent owners Neil and Steve Smyth for 10 years. She trained as a chef at Waikato Polytechnic, has cooked in many Hamilton kitchens (most recently Mavis) and has watched the city’s hospitality scene expand.

Her first job was at the long-gone Armadillo, at the north-end of Victoria Street, and she remembers when the big, bold Iguana Street Bar & Restaurant opened in the southend, and Tables on the River was taking off in Alma Street (both in the mid-1990s).

Metropolis had been closed for a few months before Cherylene returned to her old haunt, refurbished it and opened it as Koko in January. She’s kept the same layout, the cafe’s original rimu tables have been restored—“we couldn’t let those go”—and she commissioned Waikato artist Jeremy Shirley’s beautiful bird-of-paradise mural.

As well, she brings fresh energy to the food and service: “We like to do our ingredients justice.” She admires the fresh, colourful food of Israeli-English chef and foodwriter Yotam Ottolenghi and is an avid reader of cookbooks and anything that she can lay her hands on for ideas and inspiration.

The aim is for hearty, generous, reasonably priced dishes from an all-day breakfast menu and an express menu that kicks in at 11am and runs through to evening. For breakfast, they’ve got the likes of apple cinnamon waffles, wholemeal pancakes, salmon omelette, and a super-big plate listed as The Abundance.

A couple of favourites from her earlier time at Metropolis are on the express menu, including the famous ‘cone of fries’, the gado gado (wok-fried vegetables with peanut satay, tamarind vinaigrette and fresh slaw), and green Thai chicken curry.

The green curry is Cherylene’s signature dish and she’s made it at a number of city cafes where she’s cooked.  “It’s been tweaked and refined many times.” The base flavours include kaffir lime, bird’s eye chillis, fresh coriander, ginger and garlic, lime juice, fish sauce, coriander and cumin powder and seeds, and a reduced vegetable stock. “And a whole lot of love and attention.”

Cherylene, who has Samoan heritage, became Muslim in recent years, and ingredients and preparation methods at Koko are halal, observing Muslim dietary requirements. Everything is made from scratch, and Cherylene says she values her staff members, who are committed to producing Koko’s fresh, tasty food.

Chef Kerry Wise oversees the sweets in the cabinet. Cherylene says Kerry’s skill and personality shine in her work. “She brings her own character to the desserts.” Kerry’s soft-textured cashew-caramel slice and her classic Louise cake have been very popular.

Says Cherylene: “We’re building our clientele; we want to make this a friendly environment for staff and customers.” 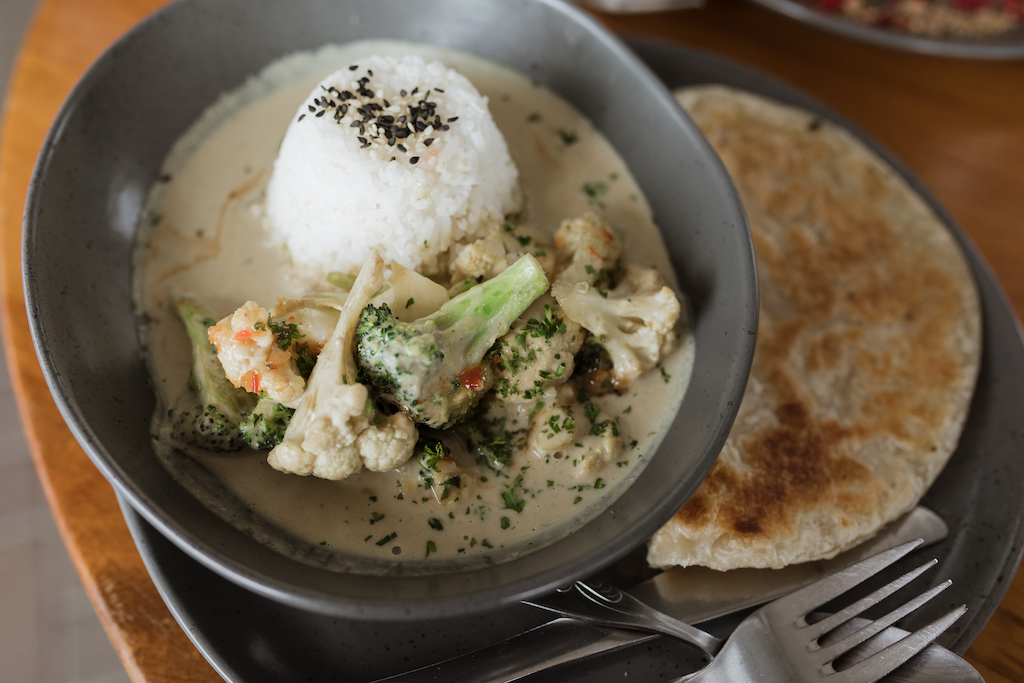