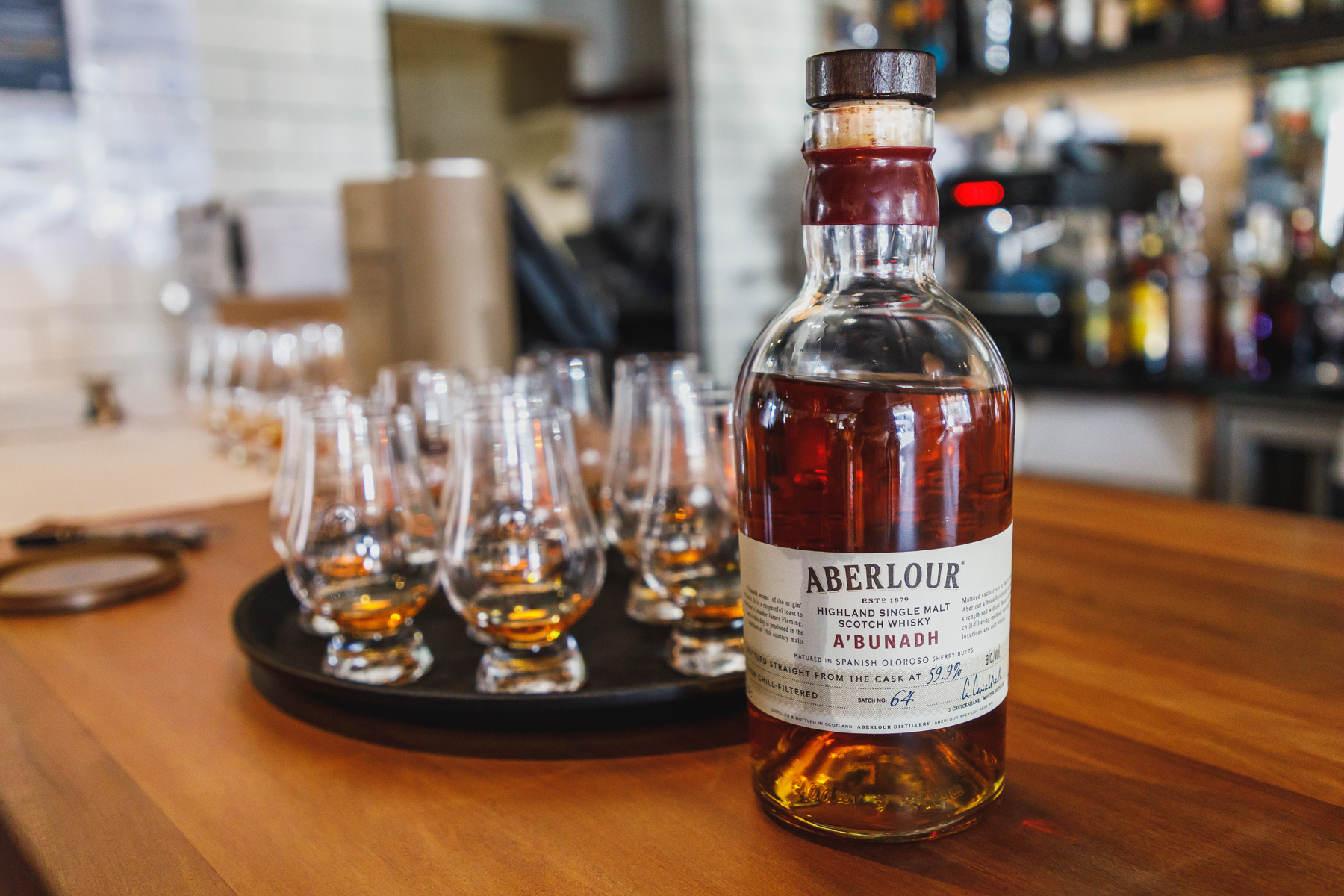 Known as the Water of Life, whisky is a drink steeped in tradition. It starts with just two simple ingredients (original malted barley and water) run through copper stills then aged in oak barrels before being bottled and sold around the world to be enjoyed. Be that neat, with ice, water, in a classic cocktail or for some, dare I say it, with coke.

Drinking a quality whisky is an art in itself, but don’t get too caught up, it’s also important to keep it simple and enjoy the experience. Adding a few drops of room temperature water will open the whisky up a little. Whisky contains ethanol and guaiacol molecules which stick together but they don’t mix uniformly with water. The higher ethanol concentrates in whisky the more it will benefit from adding a few drops of water—anything 46% abv and above falls into this category.

Ice is a big no in my opinion as it makes your whisky cold and this inhibits its flavours and aromas significantly. But don’t let me stop you from enjoying it with an ice cube or two if it helps you enjoy it. Especially during hot summer nights.

Ice can play a part, especially if you are going down the route of cocktails.

In my opinion, the best way to enjoy whisky is with luke-warm water. Cut the whisky with water to the strength you desire and truly enjoy the lovely aroma and taste of a well-crafted drink.

All Scotch whisky has to be:
Distilled, aged and bottled in Scotland, and must be aged in an oak cask for a minimum of three years.

Scotch Blend is something that a master blender has produced by blending together whiskies sourced from a number of distilleries. A prime example of this would be the Johnnie Walker range.

A master blender has access to whisky casks from over 20 distilleries and is looking to achieve a particular flavour profile.

Blends can be made from whiskies aged in different cask types or even different types of grains (barley, corn rye, wheat and others), although there are a number of Scotch Blends on the market which are made from just malted barley only whiskies. These tend to be far more intense in flavour and finish on the palate a bit longer. One famous malt blend is Monkey Shoulder, which is a blend of whiskies from Balvenie, Glenfiddich and Kininvie.

To be classed a single malt Scotch the whisky must be made from a single distillery from malted barley plus the other rules governing what a Scotch whisky is.

Single malts are technically still blends; they are a blend of whiskies of different ages and cask types from a single distillery. Thus the reason why they are called single malts.

Scotch whiskies, whether a blend or single malt, usually have an age statement on them. For example, when you pick a bottle of Glenfiddich 12-year-old, the youngest whisky cask that was used in the making of this barrel was 12 years old. There can be whiskies older than 12 years in there too.

There are many blends or single malts on the market without an age statement—these must be a minimum age of three years old.

Some very interesting single malts are offered by distilleries without an aged statement. While they are aged for significant lengths of time, the age is not the selling point.

For example, Laphroaig PX Cask is a whisky aged for much more than three years. The focus though is on the PX cask which refers to the whisky being additionally aged in PX ‘Pedro Ximinez’ sherry casks. Here, their aim is to provide a unique flavour profile rather than focusing on the age statement.

Single cask releases are becoming very popular. It is rare for distilleries themselves to release a single cask whisky and, if they do, they tend to be very rare and expensive. This is where independent bottlers come in.

An independent bottler doesn’t make whisky, they are in the business of buying whisky casks from distilleries. They will then take them away and release them at a certain age statement or alcohol by volume (ABV). They also sometimes run mad experiments by ageing them in different cask types.

Quite often independent bottlers will release casks that have been aged for significantly longer than the distillery themselves would.

Whisky vs Whiskey
The Scottish spell it ‘whisky’ and the Irish spell it ‘whiskey’, with an extra ‘e’. The difference in the spelling comes from the translations of the word from the Scottish and Irish Gaelic forms. Whiskey with the extra ‘e’ is also used when referring to American whiskies. So you can safely say Scotch is whisky while bourbon is whiskey.

What creates a cult following for some releases?

Pure marketing genius is what drives sales for most popular brands. This unfortunately confuses customers significantly and I fear puts them off whisky. The biggest mover and shaker in the last 12 months has been the Diageo and Games of Thrones partnership, which saw them release a special limited-edition Johnnie Walker and other single malts. Whiskies sold in these bottles weren’t necessarily any better than usual releases but scarcity and misinformation around the bottlings drives the price up significantly.

Most official releases from known distilleries are very big, in several thousand bottles. But quite often they will release very small parcels, where they might have done a mad experiment, like using a particular barley source, yeast type, or even a particular barrel. This always drives a lot of excitement and several big distilleries do regular releases.

Want to discover more about whisky? Join us for one of our tastings and follow us on Facebook.  Or go online to buy a special bottle and start enjoying the journey.

Ash Parmar is available to consult with before your next precious purchase. Better yet, why not hire him for a private evening of whisky discovery with some friends or work colleagues. Get in touch for a bespoke private tasting experience.