INTERNATIONAL EATS AT THE FARMERS MARKET 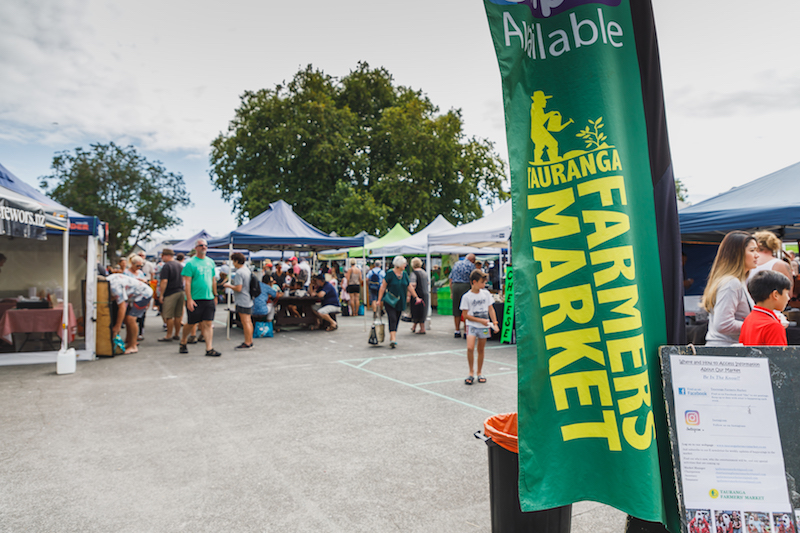 Sampling the cuisine of other countries is one of the joys of overseas travel. While we may not be able to fly to foreign shores for their flavours, we can take a trip to the Tauranga Farmers Market and discover an international smorgasbord among the market stalls.

On an ‘around the world’ tour of the Farmers Market you can meet stall holders spanning at least 10 different nationalities or heritages, each serving food which represents their country of origin.

Brazilian Bruno of The Snag Co. says his love of rugby was a factor in choosing New Zealand eight years ago. Also, the peace and the weather. Bruno, who is a highly qualified chef, and his business partner, Nicolas, make their range of beef, pork and some lamb products in Mount Maunganui. It’s no secret that Brazilians are big meat eaters, but The Snag Co has snagged Brazilian meets Kiwi tastes on small goods ‘born and raised in NZ’, with no nasties added!

Brazil also does sweet as you will discover at the Little Sweet Patisserie where Paula Garcez applies her professional pastry chef skills to speciality sweet treats, rich Brazilian sweets and little biscuits.

Be transported to India by Kumar and Carol’s Samosaz. This Indian/Kiwi couple met in Australia after Kumar had cycled overland from India. They are now based in Katikati where they produce 100% vegetarian ethnic food with a slight Kiwi twist. “Some chilis are just too hot for local tastes,” Carol points out. Their range includes Bonda which is a South Indian street food.

Sylvie from Petite Crepes has been in New Zealand for three decades without losing her expressive Frenchness, all part of the experience when you order a sweet or savoury crepe. She is from Lyons, her husband Alain from Paris and they lived in the Caribbean, USA and Canada before coming to Aotearoa. They source ingredients from their French crepes from the market, all fillings made from scratch and served rolled in paper thin crepes cooked the only way they can be—on a genuine French crepe hot plate. Their most popular filling—chocolate of course.

France is also represented by Emna and David from The Travelling Frog. They came to New Zealand four years ago, living in Arrowtown before the call of the ocean moved them north. Emna is a trained French pastry chef whose work with chefs from several different countries is reflected in her delicious baking and sweets.

Deana Spee honours her Dutch heritage at DD Croquettes, serving authentic Dutch beef croquettes and bitterballen for over five years. Preparation involves slow cooking beef and adding herbs and spices. She makes 70 at a time and serves them piping hot from her deep fryer at the market, or you can buy them frozen. She says bitterballen (tasty little meat balls) are served as a pre-dinner snack in Holland and so popular there you can get them from ‘holes-in-the-wall’ on the street.

Deanna’s sister Marijon was born in Holland before the family emigrated. You can meet her at the market selling flowers, particularly Alstroemeria, from her stand, Flourishing Flowers.

Hungarian Atilla and his English wife Sam came to New Zealand as backpackers 20 years ago. They decided to settle. As a result we benefit from the Hungarian Artisan Co’s moreish range of salamis and chorizo using traditional recipes and top-quality free-range pork, and all produced at the Te Puna Deli which they own.

Paula and Michael McMann from Shire Foods hail from Yorkshire and live in Whakamarama. They use free range pork from the Bethlehem Butchery in the freshly made Yorkshire pork pies which fly off their stall on Saturdays.

Travellers to Asia revel in the culinary sensations often produced from tiny pans on street corners. Jimmy and Tracey Zeng, who came to New Zealand from China, have been selling their dumplings and pork buns at the market for over a year.

It would not be international food without an Italian influence. You will find a taste of Italy in the Katikati Frantaio Olive Oils from Italian olives grown at the Viridis orchard; and on Lorenzo Garigilio’s Dream Cheese market stall. His cheeses are a dream, though it is also said cheese makes you dream!

Tauranga Farmers Market celebrates the fusion of flavours on Anniversary Weekend in January when each stall holder will wear or display something which identifies the country they come from.