The custard squares are made by Yvonne, one of the Fat Kiwi’s bakers, and are something she’s a bit famous for in these parts. Yvonne’s not the only legend around here though, the team behind the Fat Kiwi includes Melanie Simpson who owns the Fat Pigeon, 40ks down the road in Piopio.

The Fat Pigeon, now in its 11th year, is legendary. This welcoming cafe with faultless Ozone coffee and a cabinet stacked full of delicious food has been the favoured stop of those travelling through to Taranaki as well as the beating heart of the small town for over a decade.

Joining Mel in the Fat Kiwi is Jaimee Poole, who also comes with a long pedigree in the hospitality industry. Mel and Jaimee go way back—Mel grew up with Jaimee’s aunts and uncles and when Mel was managing Bosco’s in Te Kuiti a young 16-year-old Jaimee came to work for her.

Jaimee went on to study in Hamilton and found herself working at the likes of The Cook before returning to take over from Mel as manager of Bosco’s, when Mel left to set up Fat Pigeon. “I should have trained as a chef,” says Jaimee as she reels off her CV.

Fast forward a few years and the pair were working together again, now at the Fat Pigeon. A conversation with local businessman Alan Buckman about a possible Fat Pigeon in Otorohanga had Mel pondering when Jaimee, on maternity leave with her second child, was having the same thoughts and messaged Mel to lament the lack of places to eat in Otorohanga.

The Fat Kiwi (could there be any other name?) was born. A site was found, the old commercial hotel.  “When I saw it, I knew the location was perfect,” says Mel. For those travelling through town from Hamilton or Te Awamutu it might appear tucked out of the way, but a huge proportion of traffic come from Auckland via Pirongia missing the main street of Otorohanga, yet they will now pass the Fat Kiwi.

The site, although totally transformed now, holds a few memories for Jaimee. “I had my twenty-first here. I met my partner here.” And at one stage her aunty ran the hotel and lived on site. With strong ties to the community and great reputations, there is little wonder the local support has been tremendous. “It’s been amazing,” says Jaimee who, at just five weeks in, doesn’t know where the time has gone.

In addition to the fabulous cabinet offering, there is a full menu plus catering options. “I put one post on Facebook about catering,” Jaimee says as she shows me a pile of enquiries, “and I was bombarded.” You’ll also find fresh take home meals in the fridge with a different option each day, from chilli con carne to chicken korma or meatballs and spaghetti. “Jaimee is amazing,” beams Mel. “She is really passionate about food.”

In addition to their own offering, the cafe sells an interesting array of goodies, most with a great connection to the area, from the local honey to the art on the walls by Piopio artist Jo Gallagher.  The fresh flowers on the tables are grown just up the road, the bread is baked fresh in Hamilton by Volare while the Ozone coffee comes from the other direction in Taranaki. Whatever direction you are coming from make sure you stop at the Fat Kiwi and check them out. 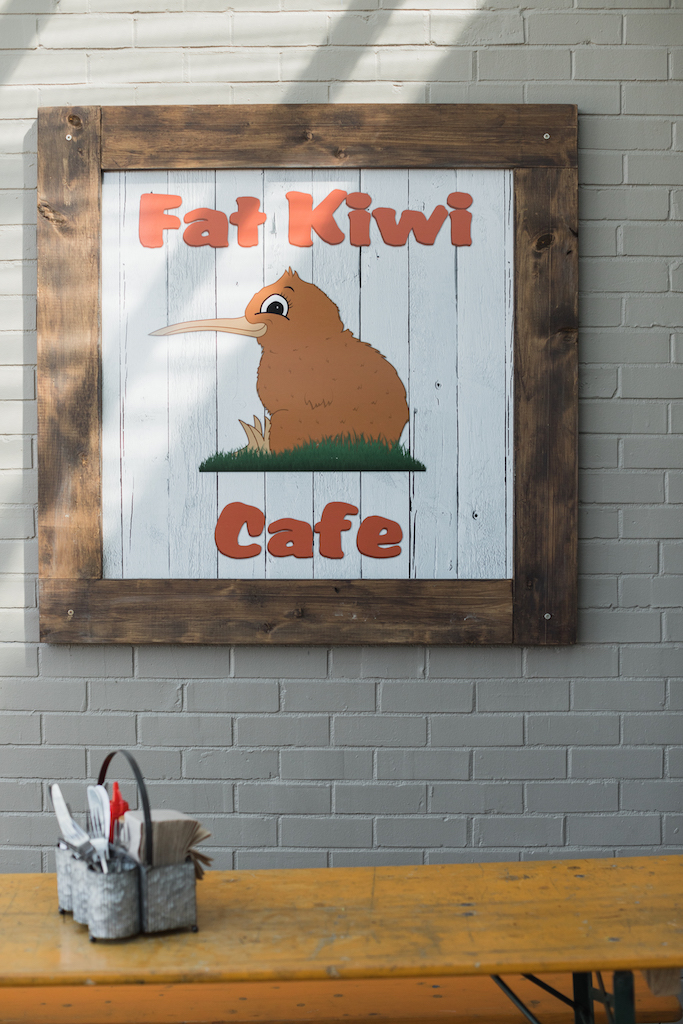