The fruit of the olive tree can divide a room. Understandable, if sliced pizza olives are the only olives someone has tried. They would be missing out on the huge variety of plump, savoury and, dare I say it, meaty, olives that can add so much to a meal. I’m firmly in the ‘love them’ camp and always have a few different types in the house. In this issue I’m sharing a simple tapenade recipe to use up that part jar of olives lurking in the fridge, and a comforting Moroccan inspired tagine that’s perfect for a chilly autumn evening.

Tagine are slow cooked savoury stews, named after the traditional cooking vessel used in Morocco and other north west African countries. A lidded casserole or slow cooker also does the job very well. This vegetable tagine is flavoured with a heady ras el hanout spice mix and studded with olives, which provide a salty contrast to the tender vegetables. Ras el hanout means ‘head of the shop’ in Arabic and every spice seller has their own signature blend. You can save time by buying ras el hanout or a simple Moroccan spice blend, but I encourage you to try making your own for the best results. Use firm green or black olives, or a combination of both, as I did.

Start by making the ras el hanout spice mix. Toast fennel, cumin and coriander seeds in a dry frying pan until fragrant. Cool, then grind in a mortar and pestle or spice grinder. Combine with remaining spices and store in a small jar. This makes enough spice mix for two tagines.

Heat olive oil in a frying pan and cook shallots until golden and tender. Remove shallots from the pan, then use the remaining oil in the pan to cook the eggplant until beginning to brown on all sides.

While the shallots and eggplant are cooking, combine all cooking liquid ingredients in a saucepan and gently heat until just simmering and honey has dissolved.

Put the potato, carrot, tomato, olives, eggplant and shallots into a tagine or lidded casserole and stir or toss so they’re evenly distributed. Arrange the chopped cauliflower and chickpeas on top—they don’t need as much cooking.

Pour the hot cooking liquid over the vegetables, put the lid on, then bake for 45–60 minutes or until the potatoes are tender.

Garnish with chopped parsley and toasted sesame seeds. Serve tagine in bowls with crusty bread to mop up the juices, or with lemony couscous or rice.

Note: You can also cook this tagine in a slow cooker for 4–5 hours on high. I prefer the flavour and texture of the tagine when cooked in the oven, but happily use the slow cooker to have a cosy meal ready to come home to on a busy day.

Amber Bremner is the author of popular plant based food blog Quite Good Food. A champion for cooking and eating food that makes you feel good, she believes small changes in the way we approach food have the power to make a difference. 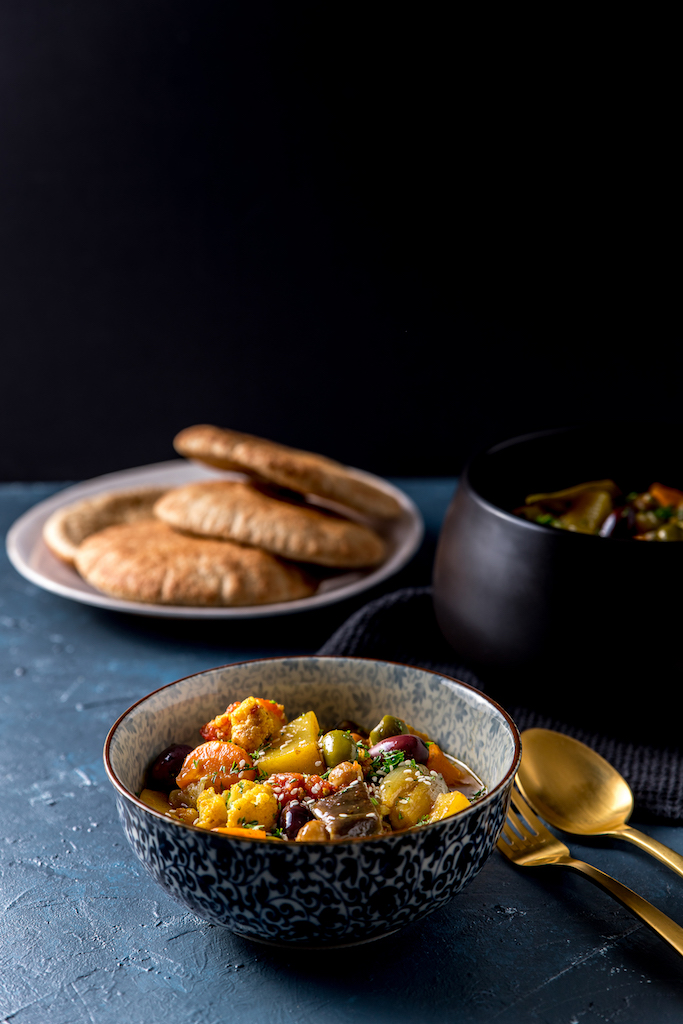