THE GOOD LIFE in Gordonton 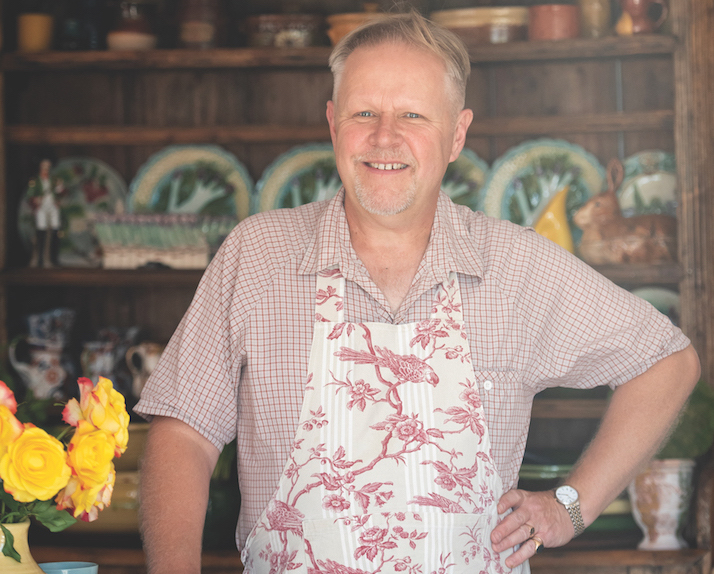 Wayne Good paid one dollar for a small wooden cottage in Auckland last year and many months later it is at the heart of his new enterprise at Gordonton, near Hamilton.

Wayne is a trained chef, interior designer and intrepid traveller, the three strands—interior consultation, tours and culinary demos—tucked neatly under the umbrella of his business, Arkanda Living & Interiors.

Arkanda’s design studio operates in Cambridge, the culinary demos typically run wherever Wayne is, the tours are on hold due to the global coronavirus pandemic,  and now there’s a fourth strand: a big corrugated-iron rural barn, selling French and English antiques and other period pieces.

The rustic barn is adjacent to the one-dollar weatherboard cottage—Wayne’s new home—and a similarly relocated vintage school classroom. So with a lot of things happening in one green paddock, it’s best to start at the very beginning, when Wayne had the opportunity to develop a 1ha space on a Gordonton farm. He envisaged living on the property, refurbishing the existing barn for an antiques business, and running his cooking schools on site.

“I wanted it to be a country destination, adding to Gordonton village’s other attractions.”

First he found his gold-coin home, a solidly built 1940s cottage with a terracotta-tiled roof, originally from Whenuapai Air Force Base, near Auckland. The cottage was in a house-mover’s yard, in a sorry state, but he fell for its simple bones and small-is-beautiful charm. “With some houses, you just walk in, and you know [it’s the one]. I loved it. I saw its potential.”

The cottage was trucked to Gordonton (at a cost of $40,000) just before the nationwide coronavirus lockdown in March. The farm site takes full advantage of sunshine and rural views, and builder-brothers Jarrad and Garth Studer, of Gordonton’s IWIK Builders, started the revamp immediately after lockdown.

With Wayne’s design skills and the brothers’ building expertise—Wayne says the Studers are the best he’s known—the 80sqm two-bedroom cottage has been tastefully transformed.  Walls were shifted to create a generous kitchen, dining and living space, new wooden-framed French doors were installed to complement existing wooden joinery, and decks have been built on the northern and western aspects.

Add Wayne’s carefully chosen vintage furniture, artwork, collectables and kitchen fittings to the mix and you get a pretty picture. He moved in at the end of October, the antiques barn opened in early November, and his sell-out Christmas cooking classes (300 bookings) were held in the cottage kitchen.

The next thing to tackle is the old school classroom, believed to be from Te Awamutu, but found in a house-mover’s yard at Horotiu. It has a pitched ceiling, a solid wooden floor and its original blackboard. It will become the venue for Wayne’s cooking classes, but he’s leaving this refurbishment till next year. He’s hoping the premises will be used by other chefs and craftspeople as well.

Wayne is pleased with what he’s achieved so far, especially the rehoming of vintage buildings. “I’m really into recycling; it’s like my mission statement.” The antiques barn will follow this theme as well. The aim is to reuse and repurpose goods at affordable prices. The barn will also sell soft furnishings and homewares, plus outdoor furniture from English manufacturer Oxley’s, and herbs grown in the nearby greenhouse.

Wayne’s multitasking extends to development of the grounds, and he has worked on a plan with Anna Sinclair. There will be plantings of lavender and wildflowers, with the farm’s mature plane trees and kahikatea stands providing a green backdrop to the enclave.

In lockdown, while the cottage and barn makeovers were on hold, Wayne planted groves of fruit trees, including citrus, feijoas, plums, peaches and apples. There is also an olive grove.  He jokes, “Goodness knows what we’ll eventually do with all the fruit.”

He also helped milk cows on the farm during lockdown, and he built a (somewhat crooked) fence. He’s recently acquired a friendly heifer calf named Beryl, who will be joined by Bernie, a young steer. The new pets continue a ‘B’ naming convention that includes Basil, the Jack Russell terrier, and Bobby, a retired working dog.

Nowadays, when the work is done, you’ll likely find Wayne “out west” on his deck, watching the gloriously fiery Gordonton sunsets, and soaking up his new life in the country.