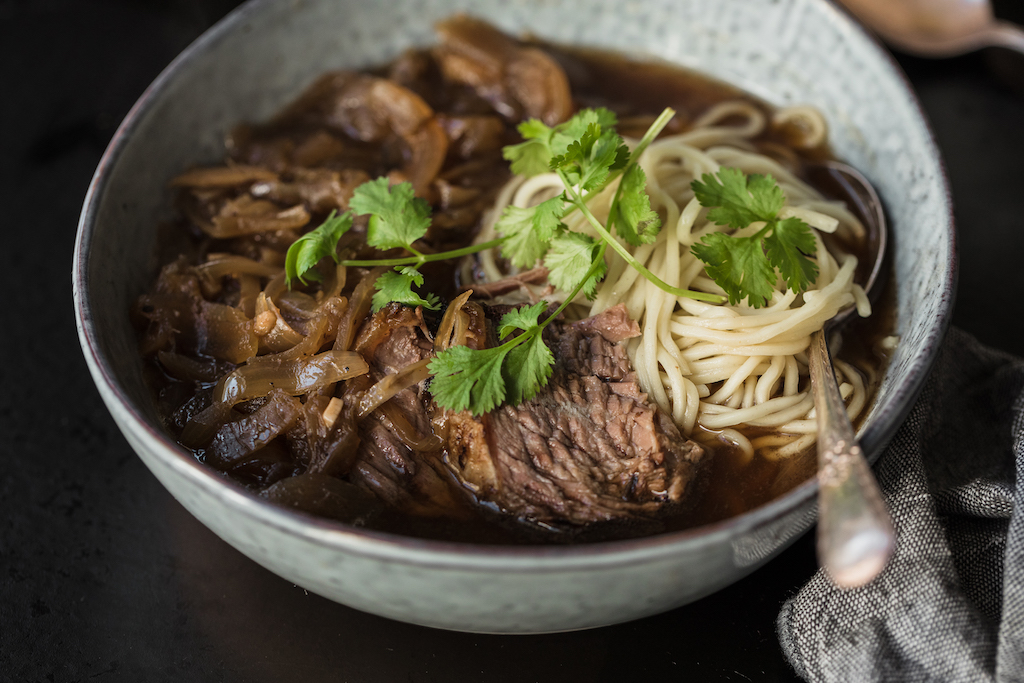 This recipe is based on one by Amiel Stanek from Bon Appetit. It crosses the classic French onion soup with slow cooked beef and moreish noodles.
The original recipe used a few too many pots and pans for me, and while I appreciate this would result in a clear soup, I’m a practical cook who appreciates the flavour and clear bench to the perfect looking bowl.

Be warned this is a generous recipe. You’ll need a minimum three litre pot, preferably a heavy Dutch oven type. Unless you are feeding a large crowd, freezing it is a great option. I do this without the noodles, which are best added just before serving and why my measurement of the noodles you need are based on how many people you are serving at the time.

Melt the butter in a large pot or Dutch oven over medium-high then add the onions. Cook, stirring often, until the onions begin to take on some colour, then turn down the heat and cook until they are golden and soft but not mushy.

Take the onions out of the pot, turn up the heat and add the oil. Cut the short ribs into single ribs and trim them of excess fat. Season generously with salt and sear these until golden brown on all sides. Remove the ribs from the pot, placing these with the onions.

Carefully pour off any excess fat left behind and return the pot to a medium heat. Add the garlic, ginger, star anise, cinnamon, ground pepper, coriander and cloves. Cook, stirring often, until fragrant and oil is sizzling. Pour in the mirin and simmer until nearly evaporated. Return the onion and beef, add soy sauce along with the stock and water. Bring to a boil, then reduce heat and cover partially with a lid. Simmer for 3–3½ hours, until the meat is nearly falling off the bone.

Carefully remove the beef and allow it to cool enough to handle. Cut and discard the bones. This is also a good time to try and retrieve and throw out the cinnamon quills and star anise.

Return the meat to the soup and simmer uncovered for another 30 minutes. Add vinegar/lime juice and check the balance, adding more vinegar and/or soy sauce if needed.

Cook noodles according to package directions. Divide among bowls. Ladle soup over noodles, making sure each bowl gets some meat and plenty of onions. Garnish with fresh coriander and serve.

*I prefer fresh noodles if you have them, as they simply need plunging into boiling water and are ready to go. You will find a range of NZ made fresh noodles in most Asian and
specialty stores. Dry noodles work just as well with the convenience of being shelf stable; they just take a little longer to cook.