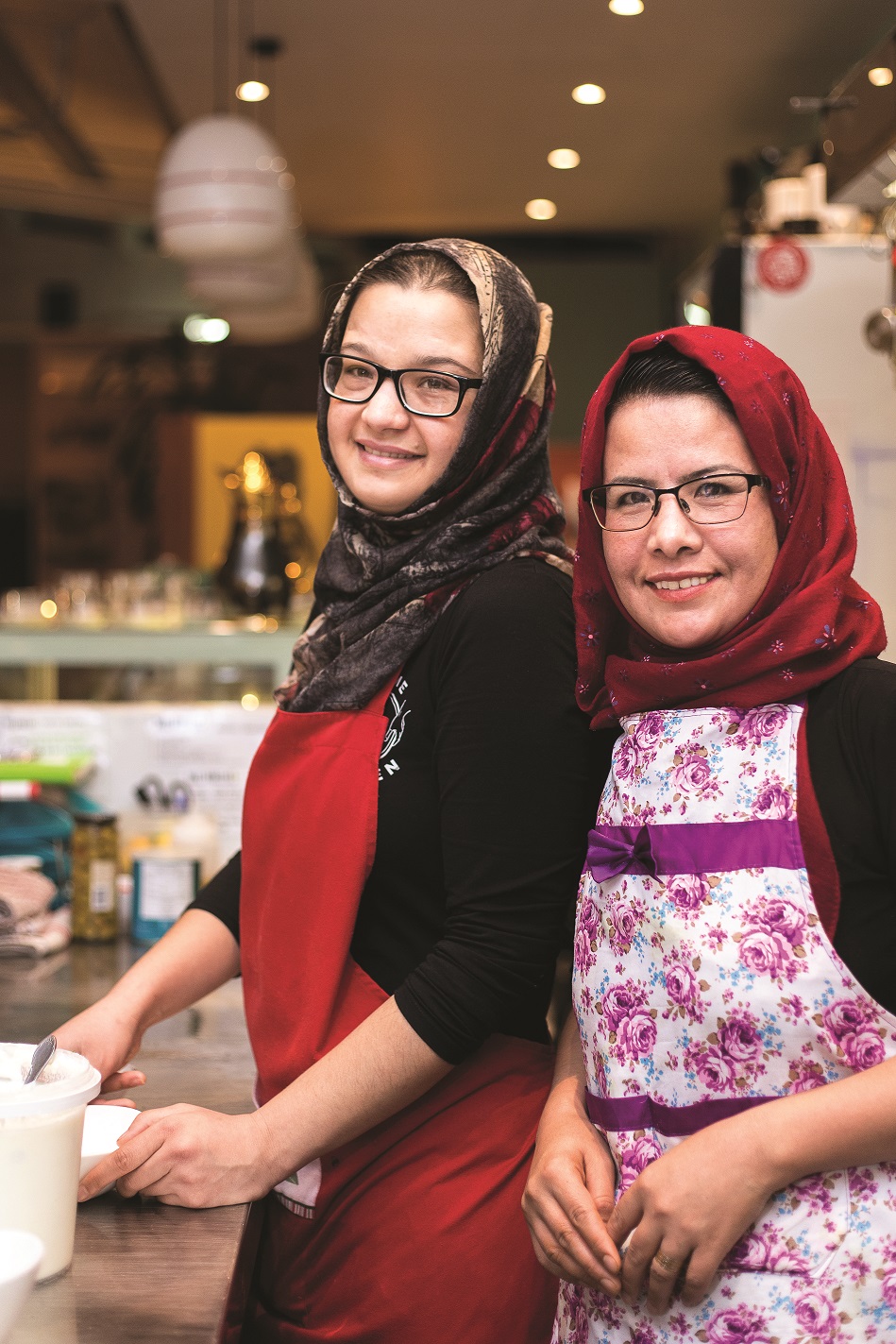 Words and Images by Amber Bremner

Yesterday is gone and its tale told. Today new seeds are growing. – Rumi

A small but industrious team of former refugees is working hard to make its mark on Hamilton’s hospitality scene, but not in the way you might expect. The team at Home Kitchen is turning out beautiful plates of food, but they’re also looking for something different: connection, belonging and a new start.

Let’s rewind to 2015. Tania Jones was working a corporate job in the software development industry. She watched the Syrian refugee crisis unfolding in the media and felt helpless to do anything. “I really connected with the issue. It was heart breaking. But I thought—what can one person do?”

Two years later Tania became aware of Defend Europe, a far-right group with the stated aim of monitoring refugee rescues in the Mediterranean. In reality they were actively obstructing non-government organisation (NGO) vessels from rescuing migrants who had set sail from North Africa.

Tania says learning about this was the catalyst. “I knew I had to do something to help, to take action somehow. So I made the decision to stand in my values.” In September 2017 Tania arrived on the island of Lesvos in Greece, ready to volunteer at Kara Tepe refugee camp. On this small island over 10,000 men, women and children from Syria, Afghanistan and other countries are waiting in camps. Moria, the largest of them, has been called the worst refugee camp on earth with over 7,500 people living in desperate and dangerous conditions while they wait indefinitely for their asylum applications to be processed.

Tania soon met locals Nikos and Katerina, who originally started helping by going down to the beach every night with food, blankets and clothes to hand out as boats full of people came ashore. The need was huge, and before long Nikos and Katerina turned their tourist restaurant into Home For All, a social charity kitchen to support the refugee community.

“Anyone could go to their restaurant and be fed a lovingly cooked meal for free,” says Tania. “Different faiths were put to one side as people ate together. People were treated with dignity and respect, and I was blown away by the warmth and sense of belonging it created.” Today, Home For All is a fully fledged Greek NGO dedicated to giving refugees a break from the stresses of living inside the camps, and a crucial support hub for families and community members on Lesvos.

When Tania came back to New Zealand she wanted to recreate something similar to support our former refugee community in Hamilton. She went to the Red Cross to find out about the gaps and talk about how she could help. “I thought about upskilling people in computer coding, but then found out about a group of women who wanted to cook,” Tania explains.

Home Kitchen launched in March 2019 as a social enterprise focused on empowering former refugees to flourish by providing work and training opportunities that showcase their diverse food and cultures. It began with pop-up restaurant evenings at Yalla Yalla Café and has continued with hugely popular cooking classes and catering services. In-home dining and cooking class options are set to offer even better opportunities for learning and social connection.

Head chef Nikbakht Danish, 32, says working with Home Kitchen has already helped her a lot. Originally from Bamyan, Afghanistan, she migrated to New Zealand with her husband and three children in 2013 as part of New Zealand’s annual refugee quota. “At the beginning, everything was so hard. Communication, transport and the culture were all new. But there is so much opportunity for everyone in New Zealand. We learned English at Wintec and received so much support and encouragement. Now my children are learning two cultures and doing very well with school and sports.”

Nikbakht helped start a women’s bakery in Bamyan and volunteers at the settlement centre in Hamilton, but her job with Home Kitchen is the first formal employment she has had. “For the first time I am out of the house every day. I’m learning to manage people, working with the team and independently. I have learned a lot, and I am still learning every day.”

Nikbakht’s dream for her family is to have their own business one day. “I would love to open an Afghan restaurant, to meet other people and introduce them to Afghan food. I want to be able to give other people the same chance I have been given, for a new start and a bright future.”

When asked what the best thing is about working with Home Kitchen, Nikbakht says it is seeing people happy. “Seeing people happy, and realising that I am able to do something for other people. Connecting with people is my dream.”

The social enterprise model is ‘for profit, for purpose’, meaning everyone on the team of nine is paid a living wage, and all profits go back into growing Home Kitchen. “Some people thought I was crazy, but I was determined everyone would be paid a living wage right from the start,” says Tania. “A living wage offers people financial independence and the ability to support their families, and although we’ve had to take a more commercial focus to cover that cost, we’re breaking even already which is fantastic.”

The immediate goal is to provide work and training for up to 20 people by the end of 2019. To make that happen, Home Kitchen needs to find a home of its own. “We’re looking for somewhere with a commercial kitchen and office space to be our base,” says Tania. “We also want to find unique dining locations around Hamilton that would be suitable for hosting pop-ups, and we’re thinking about a food truck.” Volunteers are needed to help with administration and marketing, and, notably, no one on the team has formal hospitality experience. Mentoring or other support from chefs would be invaluable.

“This is my way of generating more love and empowering people to thrive,” says Tania. “I hope that through our work we can eventually increase awareness and gain more love and support for all refugees everywhere, and offer real opportunities where refugees and former refugees can celebrate their culture, earn a decent wage and feel a strong sense of belonging in their new or temporary communities.”