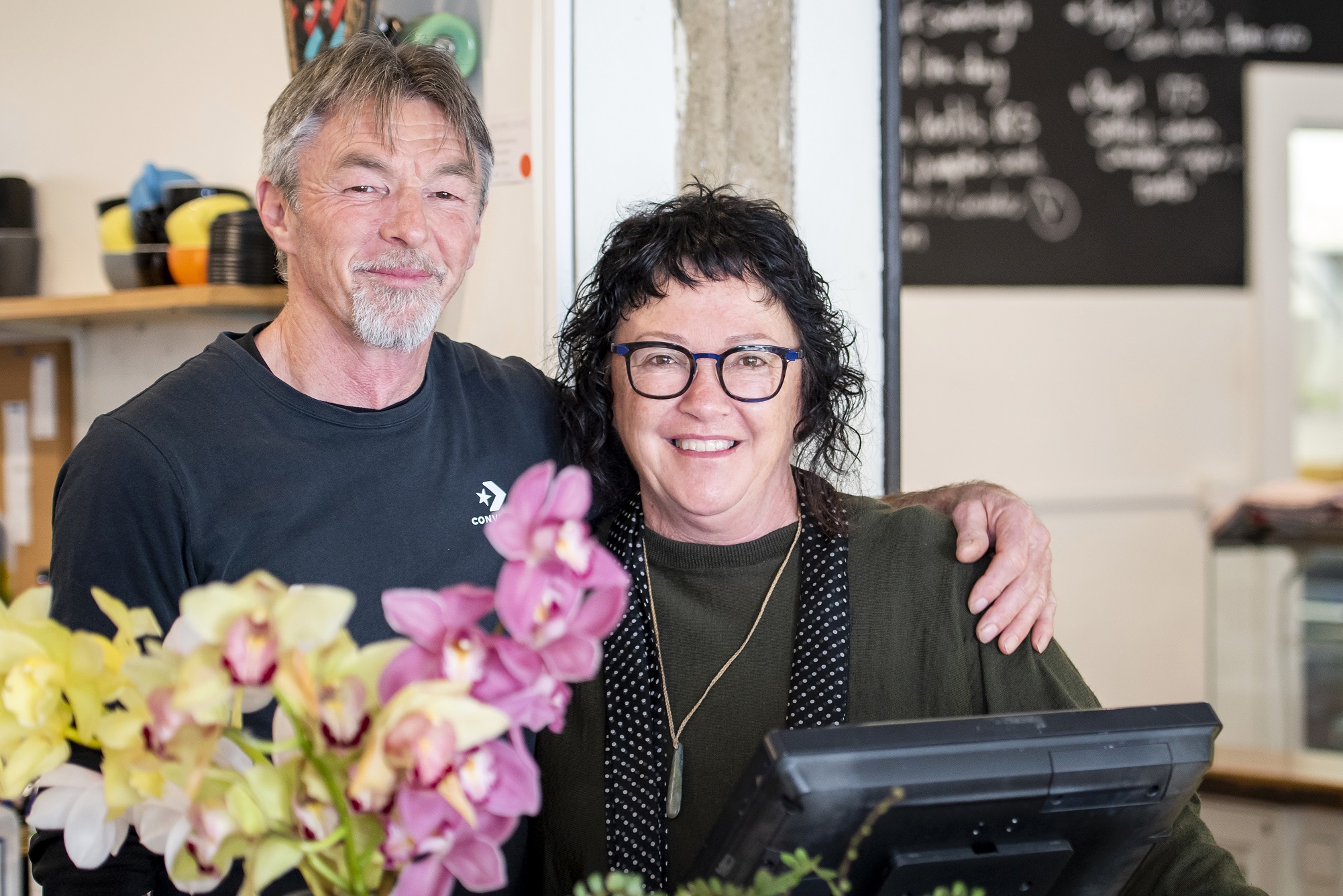 Dry Dock Cafe recently celebrated its tenth birthday. An achievement it shares with Nourish magazine and even more worthy of celebration when the cafe, just like Nourish, has been under the same owner for the entire ten years.

Nourish magazine’s interview with Dry Dock Cafe owner Sandra Johnson was constantly and delightfully interrupted as she welcomed regulars streaming in the door. She knew most of her customers by name. “I am a social person, which is why this suits me perfectly.”

Before Dry Dock, Sandra had never worked in hospitality, and may never have done so had she not been made redundant from her job in a newspaper advertising department. After taking six months off and visiting her adult children in England, she sought advice from local business personality Anne Pankhurst. Anne’s extensive experience in hospitality helped her identify a new path for Sandra. “I know just the business for you,” she said. It was Sierra Cafe, for sale on Wharf Street.

Sandra bought the cafe in May 2010, renamed it Dry Dock Cafe (“I Googled ‘wharf’ for inspiration”) and began her cafe career in the narrow premises with a tiny kitchen at the rear. “Just buy a Shacklock oven and shove it in the corner,” said Anne. It’s still there.

The cafe thrived, regulars attracted by Sandra’s bubbly personality and by the consistency of the coffee and fare. Sandra’s partner, Roger Norton, joined the team. Roger can take a lot of the credit for the cafe’s claim to “the best coffee in town”. Dry Dock Cafe uses Ozone beans from New Plymouth, weighs every shot and makes them all doubles.

Dry Dock Cafe was right beside Sunrise Cafe, a long-standing Tauranga vegetarian cafe. In 2014 Sandra took over the space. It took all Labour Weekend to knock out the wall between the two. Dry Dock Cafe more than doubled in size and gained a second, much larger kitchen, facilitating the blackboard menu that accompanies the cabinet food, all made on site.

While the friendly atmosphere and the emphasis on simply good food done well has not changed, the décor has undergone several iterations and been enhanced by Dry Dock Cafe regulars. Tauranga columnist (and artist), Marcel Currin, created a personalised painting for them. The huge hanging dried flower arrangements are complements of Tami who is a customer. The Solo Mio autographed picture was gifted by the trio who always eat at Dry Dock Cafe when performing in Tauranga. “We had some tourists in who thought they were the All Blacks!” laughs Sandra.

Dry Dock Cafe also supports local artists. The current exhibition by Maketu artist James Henry Atutahi is his third at the cafe. A regular bought a work, carved on a skateboard, and left it on Dry Dock Cafe’s wall. Wall hung tables made from local oak are among the eclectic mix of furniture in the cafe, offset by light white walls, high ceilings and sun flooded front windows.

Coming back from COVID

Dry Dock Cafe’s clientele has always been about half locals, half tourists (as they are near the waterfront, the I-site, art gallery, library and the bus station). Until COVID that was. Not only have they lost tourist trade, the resulting increase in people working from home affected them as well. “We appreciated the wage subsidy which meant we could keep all our staff on, and the loyalty of our regulars who have returned with a vengeance, even those who are now partly or full time home based.” Sandra and Roger are delighted to see the work on transforming this block of Wharf Street is proceeding as planned and Dry Dock Cafe will soon be part of a pedestrian precinct focused on hospitality.

During their seven weeks enforced holiday they had time to work on the business. They have put all 13 staff, including themselves, on a four day on, two off rotation so they all get good work life balance; and Roger has time to ride his Harley Davidson!

Sandra acknowledges it’s been a full-on decade; one she wouldn’t have missed for the world.

“It’s a privilege to be here, to have developed the relationships we have and to feel that we have created a community at Dry Dock Cafe.”