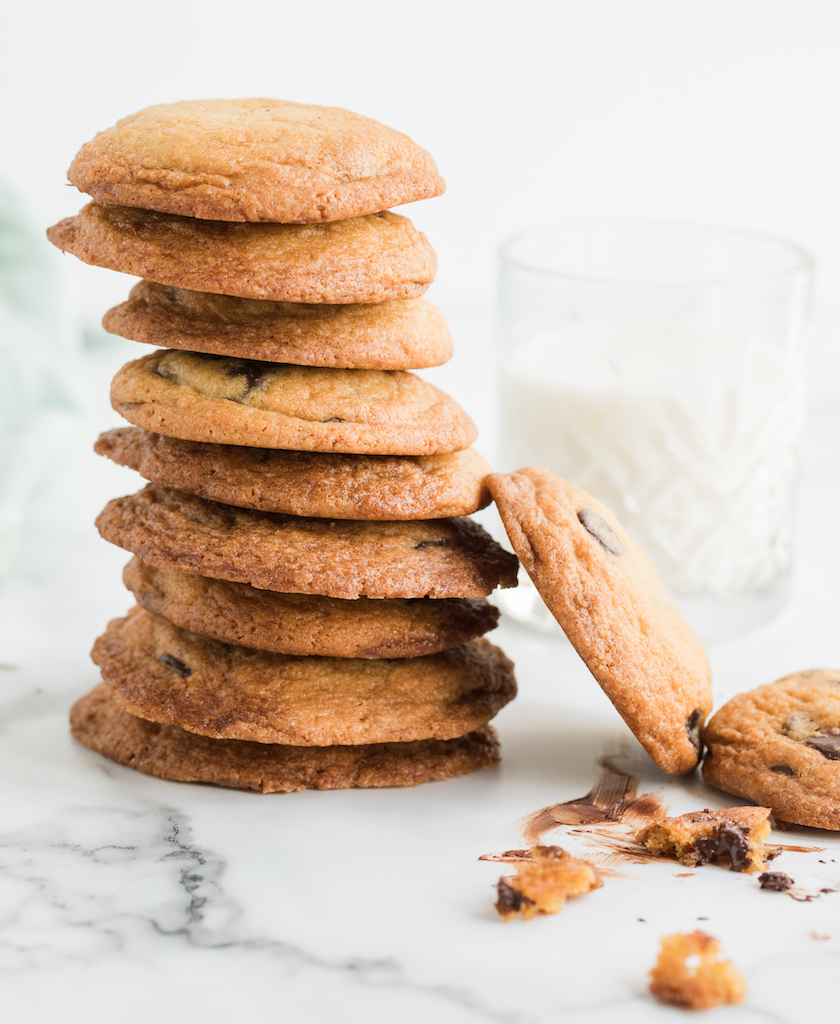 The original chocolate chip cookies were invented in the 30s by American chef Ruth Graves Wakefield from the Toll House Inn in Whitman, Massachusetts. The recipe for these cookies, where Ruth had added pieces of a Nestlé semi-sweet chocolate bar, first appeared in her recipe book Toll House Tried and True Recipes in 1938.

With World War Two raging at the time, legend has it soldiers from Massachusetts would receive homemade Toll House cookies in their care packages and share these around. This led to soldiers writing home requesting Toll House cookies and in turn Ruth was inundated with requests for the recipe.

My recipe (below) is very similar to Ruth’s, which she apparently sold to Nestle for just $1. I prefer a good quality dark chocolate like Whittakers 50% dark or Callebaut 70% dark callets from Vetro Tauranga. Omitted from many modern recipes, mine, like Ruth’s, dissolves the baking soda before adding. Ruth used water, I use milk—the result is the same, no awful baking soda aftertaste.

Apparently, the original Toll House version called for half a teaspoon of dough per cookie. I’m not sure that would be classed as a cookie in my house. I also think a slightly bigger one yields the perfect texture: crisp on the outside but soft and gooey on the inside.

Chilling the dough before baking was also a key step of the original recipe and a step I can highly recommend. Chilling the dough before baking solidifies the fat in the cookies. As the cookies bake, the fat in the chilled cookie dough takes longer to melt than room-temperature fat. And the longer the fat remains solid, the less cookies spread. Chilled dough also results in browner cookies with a superior texture.

The good news is the recipe below makes 40-50 cookies. I will often make a batch, roll and chill a tray or two and then freeze the rest. This means you have fresh homemade cookies at a moment’s notice.

Cream the butter and sugars until light and fluffy. Dissolve the baking soda in the milk then add to the beaten butter with vanilla. Add eggs one at a time, beating between each. Finally, mix in the flour and chocolate chips until well incorporated.

Roll tablespoonfuls of dough (approx. 25g each) into balls and place well spread out on a lined baking tray. Chill for at least 30 minutes or if possible, overnight.

NOTE – you can bake frozen dough balls. Simply take them out of the freezer and place on an oven tray. By the time the oven has heated up, they will be ready to bake.

Roll the cookie dough into 20g balls and bake at 180°C for 9°12 minutes. When cool sandwich a scoop of ice cream between two cookies.

Dip the sandwiches with chocolate, sprinkles or chopped nuts. Freeze until ready to eat.