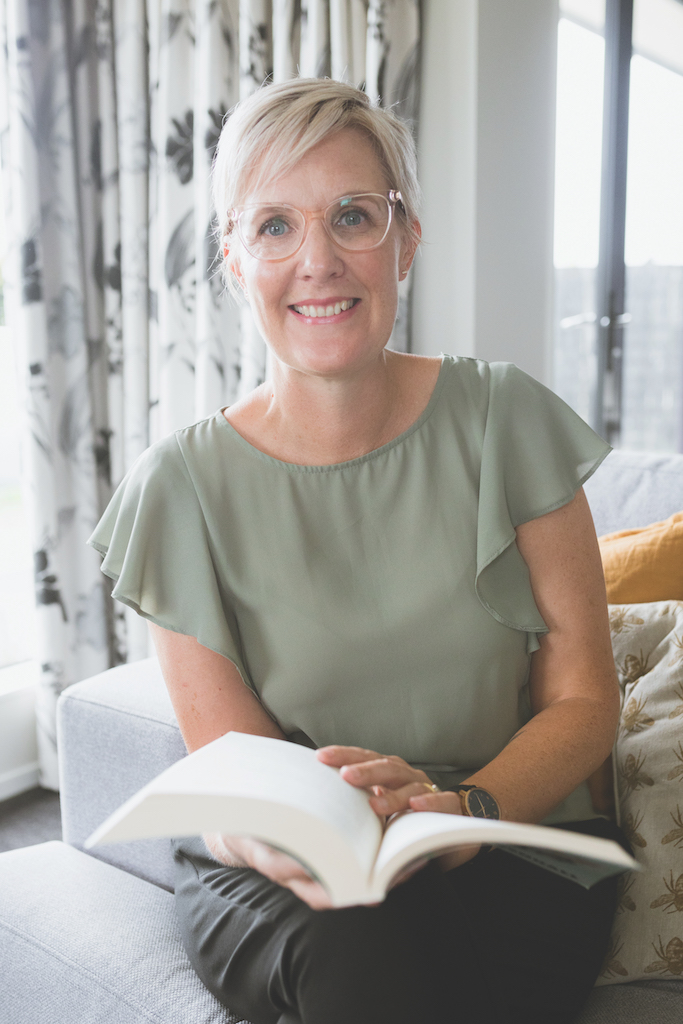 You wouldn’t know it from looking at her, but Cambridge author Nikki Crutchley loves to creep people out.

“I love it when people say they have nightmares about my books,” laughs Nikki, chatting over coffee at her dining room table.

Daughters Cate, 13, and Abbie, 11, have just gone for a bike ride, and the family home is warm and inviting, just like Nikki.

However, as a mystery and crime fiction writer, Nikki’s days are often filled with writing about dead bodies and getting inside the minds of killer characters.

It’s a career that is paying off for the 42-year-old novelist, who has self-published three books over the past four years.

The manuscript for her fourth novel, a psychological thriller called To the Sea, was snapped up by Harper Collins Australia in December, who have offered Nikki a two-book publishing deal.

“There were tears,” admits Nikki, who was at home with her daughters when her literary agent, Vicki Marsdon from High Spot Literary, called with the good news.

Over the past five years, Nikki has built up a reputation as one of New Zealand’s best emerging writers.

Her first novel, Nothing Bad Happens Here (2017), was a finalist for best first novel in the 2018 Ngaio Marsh Awards—New Zealand’s crime writing awards which recognise excellence in crime fiction, mystery and thriller writing. Set in the fictional town of Castle Bay—loosely inspired by Whangamata and the Wentworth Valley in the Coromandel—the story revolves around a murdered tourist and introduces journalist Miller Hatcher as the protagonist.

Nikki’s second novel, No One Can Hear You (2018), was long-listed for best novel in the Ngaio Marsh Awards in 2019. It is also set in a small town—Crawton, which is reminiscent of Cambridge, and the scene of the abduction and disappearance of several young women.

Her third novel, The Murder Club, which was published last September, reintroduces the character of Miller Hatcher. This story follows a serial killer which is terrorising the small town of Lentford, inspired by Morrinsville, Cambridge and Otorohanga. It’s a real page-turner, tightly written with a great cast of characters, and with plot twists and turns which keeps the reader guessing until the end.

All three books have been self-published, with Nikki managing the whole process, including marketing and social media. Her tech-savvy husband Simon helped with formatting and layout, and Nikki had each book professionally assessed, edited and proofread before they were printed by Your Books in Wellington.

“I was determined to do it properly, and I wanted my books to look the same as any other book on a shelf in a book shop,” says Nikki.

Getting the details right is important to Nikki. She has consulted experts, including retired undercover detectives, a pathologist, newspaper journalists, and even a beekeeper, to ensure verisimilitude with her characters and narrative.

“I talked to a pathologist about what dead bodies look like when they’re strangled, stuff like that,” she says.

In 2018, Nikki was contacted by New Zealand literary agent Vicki Marsdon from High Spot Literary offering to represent her.

Vicki’s feedback also informed Nikki’s fourth book, To the Sea, including a number of revisions to the ending.

The psychological thriller is set in a coastal area with a pine plantation, inspired in part by Opoutere and Shakespeare Cliff in the Coromandel.

“It’s chilling, creepy and very insular, with a small cast of characters—three generations of one family.”

It’s not surprising that small town Waikato and Coromandel settings are the inspiration for Nikki’s novels.

“I have an affinity for small-town New Zealand,” says Nikki, who was born in Cambridge, lived briefly in Matamata, and moved to Otorohanga at the age of eight. Every summer was spent at Whangamata.

“Small towns are so much more interesting than a city. You can’t get away with a lot in a small town, and there is that idea of protecting each other. There are lots of juicy secrets hidden beneath the surface.”

Writing has always been a passion for Nikki.

“If you’d asked me when I was eight or nine years old, what I wanted to be when I grew up, it would have been a writer.

“I remember reading books and being transported to a new world, and I think that’s what books do—they are an escape.”

In her teens, Nikki started reading Patricia Cornwell novels, along with Stephen King and James Patterson, which sparked her interest in the crime, mystery and psychological thriller genres.

After the birth of her two daughters, Nikki started writing fairy stories for her daughters, then decided to try her hand at writing historical fiction.

“I stopped at twenty thousand words because it wasn’t working. All my ideas included violence, crime or murder.”

In 2015, Nikki started writing Nothing Bad Happens Here, a book she would spend two years working on.

One of her first clients was Nourish magazine.

“The Autumn 2015 edition was the first issue I worked on,” says Nikki, who has continued to edit and proofread each quarterly issue of Nourish ever since—juggling her business with fiction writing.

“I love it, and it’s a really enjoyable magazine to proofread. I love the content and always get great recipes from it.”

She is proud of To the Sea—“it’s the book I’ve always wanted to write”—and is looking forward to it hitting bookstores in Australia and New Zealand in December 2021, just in time for the Christmas market.