On Fire in the Mount 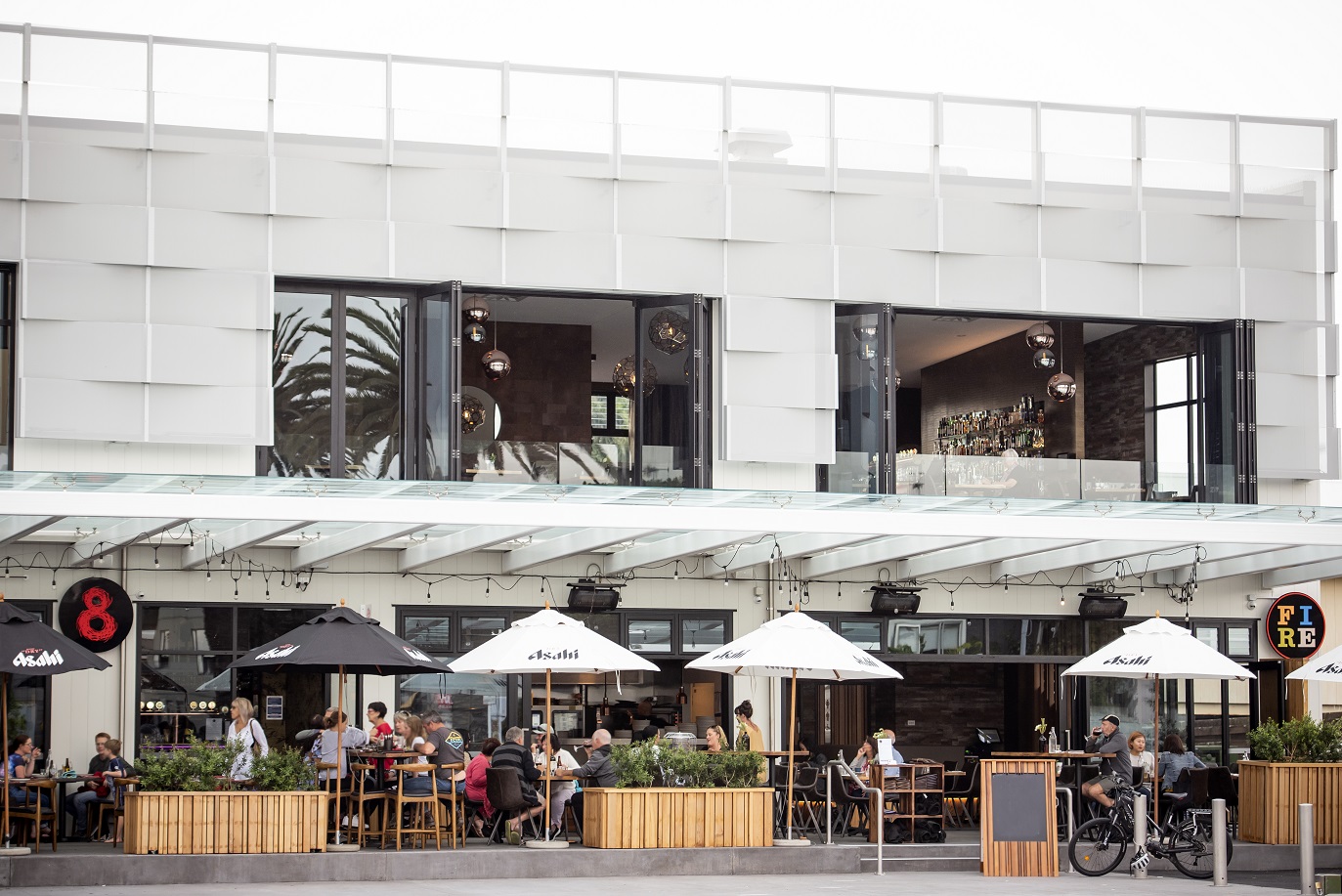 Mt Maunganui’s side-by-side restaurants, Fire and No.8, are a bright main street beacon at night. Our family is drawn into the glow on a recent Friday, and it suits us perfectly.

We’re at the smart-casual Fire, and next door is its sister restaurant No.8, which offers a fresh and fragrant Asian-fusion menu.

We are three generations tonight at Fire. The grown-ups sit outdoors on the terrace and enjoy wine and beer from an interesting selection. We watch the kids—who’ve brought their scooters to the party—ripping around on the adjacent Phoenix Park. It’s a win-win for everyone.

The kids have a great time; when dinner’s served they park their scooters and join us for their fish and chips. The rest of us variously eat delicious seared tuna, butternut ravioli, roasted carrots, market fish and truffle pig pizza.

That’s another good thing, there’s something for everyone at Fire: you can go casual with pizza, burger, and fish and chips, or smarter with the likes of tuna, smoked lamb shoulder, grilled pork loin and more, with well-judged accompaniments.

It’s all down to thoughtful planning by co-owners Lloyd Rooney and Michael Fraser. They own No.8 next door as well, and the two Mount restaurants are the latest additions to their stable of six coastal eateries with a ‘gate to plate’ food philosophy.

Lloyd and Michael are partners in business and life; they live in Northland but have a strong connection to the Mount. Michael’s originally from Te Awamutu; his family have owned a house at Mt Maunganui for several decades, and he and Lloyd held their civil union ceremony in the lee of Mauo in 2006.

Fire and No.8 opened in December last year, and the pair were hands-on during the testing craziness of peak summer. Says Lloyd, over coffee at Fire, “The Mount is a special place for us. When this new building (beside Phoenix Park) became available, we saw an opportunity, and we knew we could use the systems and styles of our Northland restaurants here.”

A little history on this: the Northland restaurants are The Cove at Waipu Cove (their first, in 2014), The Quay and No.8 in Whangarei Town Basin, and The Dune at Mangawhai. Northland-based executive chef Craig Estick oversees menus for the group, and chef Shane Kearns—originally from the Manawatu—heads the kitchen at Fire and No.8 at the Mount.

Although Lloyd and Michael love to cook, Lloyd says the food is always in the hands of their professional chefs. “Our intention is to empower our chefs, not dictate.” So Lloyd manages the business and Michael works on the ‘gate to plate’ side of things, growing vegetables and herbs for the restaurants at their Vege Shack property at Maungakaramea, near Whangarei.

Meat and fish is from the best regional suppliers they can find, and at the Mount they’re involving local enterprises where possible. Mount Sourdough breads and Naked Meats (Te Puna) are among these.

Lloyd and Michael are proud of what they’ve achieved, and it’s fair to say they’ve arrived at their restaurant stable by a circuitous route.

Lloyd is English, and he studied law at London University, but didn’t like practising it as much as he enjoyed the study. So he’s reinvented himself several times; he’s run his own London interior design studio, and also worked in hospitality. His most significant hospo experience was as manager of gastropub The Engineer, in London’s Primrose Hill. The landladies at that time were painter Abigail Osborne and actress Tamsin Olivier. Tamsin is the daughter of British stars Dame Joan Plowright and the late Sir Laurence Olivier; her gastropub was a popular celebrity watering-hole, with the likes of Dame Maggie Smith among the clientele.

Lloyd reinvented himself again after he met Kiwi farmer Michael in London, in 2005. He moved to New Zealand with Michael the next year, became a farmer as well, and they bought a sheep and cattle property, Highgate Hill, in North Waikato. Seven years later they took on a quaint coastal cafe in Waipu Cove, and a new era/empire in hospitality began. As the business grew, they eventually leased the farm and moved north.

Lloyd has done the fit-outs for the six restaurants. “It’s all about having a good eye, and lots and lots of practise,” he says. The spacious Fire—it seats 95 upstairs and 50 downstairs—is casually glam, with clever lighting, chocolate vinyl chairs and booths, American oak flooring and faux-hide wall-coverings. The décor next door at the smaller No. 8 is more exotic-Eastern; there is silver foil wallpaper and tasteful furniture and fittings.

A basic philosophy drives all six restaurants. Says Lloyd: “Customers always come first. Our priority is to ensure everyone has a great experience with good food and good service. If you are nice to people, get them on side, then everything else will flow from there.”

Which pretty much sums up our family’s night at Fire.

Open Wednesday to Friday from 11am – Late,
Saturday to Sunday 9am – Late.
Closed Monday and Tuesday.