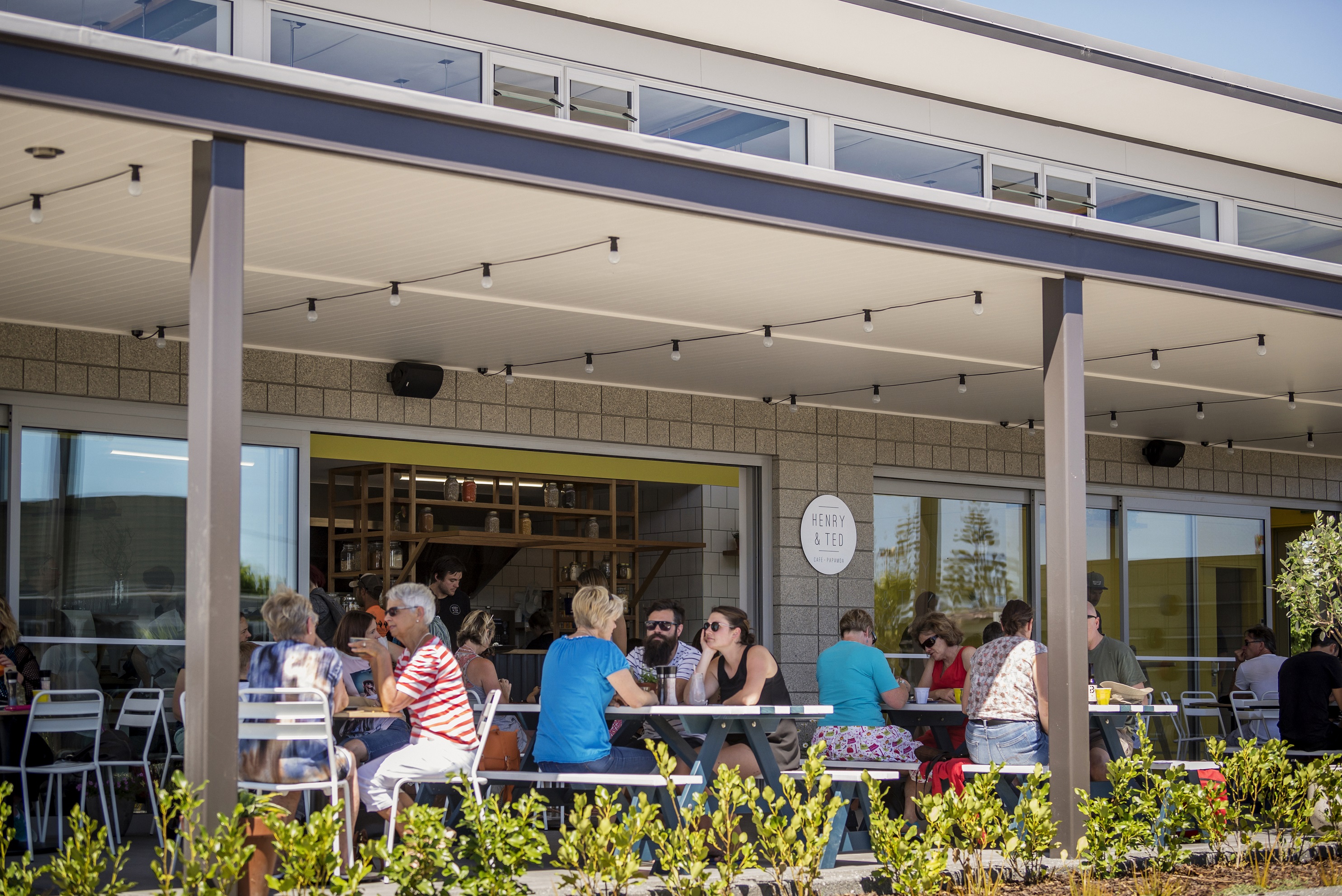 It takes George Gibson a little while to get a word in edgeways about his cafe Henry & Ted. George is being interviewed by Nourish on the highlights of the first five years of his Papamoa East eatery but customer Gus is the one doing the talking at the table.

Gus looks up from his coffee as questions are asked, and he chips in with all the things he loves about the place: “It’s friendly, it’s on the sunny side of the street, the service is great, the food and the coffee are excellent. It’s like a family here, everyone knows your name. We’re all mates.”

Gus’s first time at Henry & Ted was a couple of years ago. He’s a painter, he was in his work clothes that day, and he wondered if the place was a bit upmarket for him. Not at all, and he’s been a regular ever since. He rates the crusty cheese scones as the best, “apart from the ones my mother used to make”.

Customer Jan, at another table, joins in: she’s been unwell recently and she says Henry & Ted saved her life with their beautiful soup and pies. “They kept me going; George made some soup especially for me.”

George listens to the temporary hijacking of his interview, and at the same time he’s keeping an eye on a new addition to the Henry & Ted team. This is his labradoodle puppy Harry, a bundle of fluff and cuddliness being admired by customers. Harry is highly likely to become a fixture at the dog-friendly establishment where there are water bowls on the terrace, as well as bike racks for all the cyclists in George’s neighbourhood. “We look after everyone here.”

George’s customers have watched Henry & Ted grow from a container business five years ago, to the smart and sunny licensed cafe on Golden Sands Drive, open seven days for breakfast, lunch and general grazing, with the same laidback style of the earliest incarnation.

George, a trained chef, was working in Wanaka when he visited his sister Charlotte and her family in Papamoa and saw the opportunity for a cafe. He’s proud of what he’s achieved. “My business plan was to create a hub for the community with good coffee, good food and good service. That’s what we’ve done.”

Henry & Ted was named after George’s oldest Papamoa nephew, Henry, who has a labradoodle called Ted.  Henry was aged one when Henry & Ted began, now he’s six and a pupil at Golden Sands Primary, across the road from the cafe.  George sometimes names dishes after his family and friends, and new puppy Harry gets the nod on the latest menu: Harry’s Granola is a crunchy mixture topped with cherry and star anise poached pears, cherry compote and coconut and chia yoghurt.

Which brings us to the food, a mix of fresh sweet and savoury cabinet offerings and a wide-ranging menu covering breakfast, lunch and in-between snacks. Henry & Ted uses free-range eggs, bacon, chicken and pork, everything is made from scratch, many supplies are sourced locally and the kitchen caters for all dietary requirements.

Henry & Ted’s dishes are always greater than the sum of their parts: top quality ingredients are combined in colourful, tasty treatments and are always perfectly presented. Says George: “People eat with their eyes and it just so happens that our food tastes bloody good too.”

The kitchen team, headed by former Auckland chef Daniel Lee, comprises two bakers and three chefs. And there’s George, of course, who is constantly tossing ideas around with Daniel. George says he and Daniel are both obsessed with Italian food at present so they have a soft-textured Italian burrata cheese on the menu, paired with roast pumpkin, confit cherry tomatoes, tapenade, shaved fennel, prosciutto crisps, sourdough and hazelnut crumble. The meaty osso buco, plated with rocket salsa verde and pumpkin and sage risotto also references Italy.

The search for new ingredients and ideas is constant, and George praises Daniel’s innovation and the loyalty and skills of his wider team. “It’s a fun and friendly outfit, we’re all mates.”

George and his former cafe manager Connie Richards combined a while back to buy Tauranga eatery Elizabeth Cafe & Larder, and they also operate two Coffee Project pop-ups, one on Hull Rd, Mt Maunganui, the other at Papamoa’s Fashion Island.

George reckons he’s got plenty happening at present so is not planning further expansion. He jokes: “I said that earlier.” For the present, though, he’ll “keep doing what we’re doing but keep getting better”.

Customers Gus and Jan and many others will be happy about that.