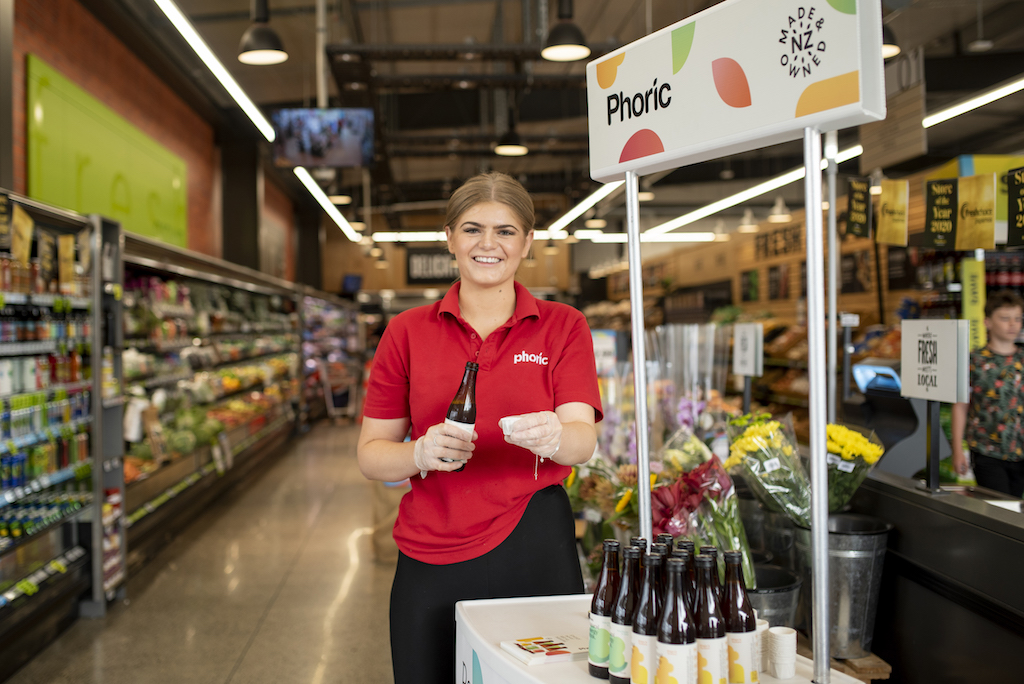 It was the busy experience of university life that gave young entrepreneurs Holly Sutich and Bradley Hagan, both 24, the idea for a new kind of energy drink.

“Everyone was drinking horrendous amounts of sugar-laden energy drinks, especially at exam time and when there were lots of assignments due,” says Holly, co-founder of Phoric. “Every common area was just a mass of students with cans and bottles everywhere.”

The two friends were first-year students at AUT in Auckland and thought there had to be a healthier option for people wanting an energy boost without artificial ingredients and refined sugars.

They did their research and entered a nine-week entrepreneurship programme called CO.STARTERS@AUT to develop their business idea. They then entered AUT’s X Challenge, a Dragon’s Den style competition where they were named the winner of the social enterprise category and supreme winner, scoring $20,000 in cash and $15,000 in business and legal advice to develop their idea.

These programmes helped them launch their new range of natural energy drinks into the New Zealand market.

Phoric is unique in that it uses guayusa, an organic source of caffeine, polyphenols and antioxidants to provide a clean-feeling energy. Guayusa leaves are a revered ingredient of tribal tradition.

Guayusa (pronounced gwy-yoo-sah) has been used for thousands of years by Amazonian tribes in Ecuador as a hot-brew energy tea, delivering strength and vitality. The leaves are grown in sustainable, biodiverse forest gardens, then harvested and dried in Ecuador, providing a source of income to the indigenous Kichwa people.

“It is important to us that the guayusa is Fair Trade, sustainably farmed, and organic,” says Holly.

Guayusa is fundamental to the culture of the indigenous Kichwa people.

“Traditionally, Kichwa families wake up before dawn and gather around a communal fire to drink guayusa,” according to Runa, a US-based company that works with farming families to supply guayusa to Phoric.

“During this early-morning ritual, community members share dreams, myths, and legends. Hunters also drink guayusa before night-time hunting trips in order to heighten their senses of awareness and focus.”

The brewed guayusa is combined with a range of natural ingredients, such as apple juice from Hawke’s Bay orchards. Phoric drinks are bottled locally in Tauranga.

Phoric was launched in April 2019, initially in the upper North Island, and expanded to the South Island late last year. The drink comes in three delicious flavours—original (apple and lemon), elderflower and lime, and ginger and turmeric.

“We have such a mix of customers,” says Holly. “Some are energy drink consumers who want a clean alternative, and others are coffee drinkers who would never touch traditional energy drinks because they don’t like the artificial ingredients, refined sugar, and artificial stimulants, but they like coffee, and Phoric contains organic caffeine. We also find a lot of kombucha drinkers enjoy Phoric.”

Holly, who is still studying, spends on average four days a week travelling around Waikato, Bay of Plenty, Coromandel and Northland demonstrating Phoric in supermarkets and stores.

“When I do in-store tastings, people always ask me, ‘so, what big company makes this?’ They don’t realise I am the founder because I look so young. I love to get honest feedback.

“I was at Te Rapa New World recently, and I met this lady who had ten bottles of Phoric ginger turmeric in her trolley. She said her husband is seventy-two and he works as an EMT [Emergency Medical Technician] ambulance officer doing twelve-hour shifts, and this is the only thing that gets him through. Things like that make your day!”

Holly is grateful for the support for their new business.

“This is a massive learning opportunity for Brad and me. We have thrown ourselves in the deep end and we are grateful for everyone who has supported us.”

As a New Zealand made and owned business, they are focused on giving back to the local community.

“Our product is by Kiwis, for Kiwis—that’s why we donate five cents from every bottle sold back to an awesome New Zealand charity called Yellow Brick Road,” says Holly. “They are a national organisation that supports families and communities who have a loved one experiencing mental health challenges.

“Mental health is a huge problem in New Zealand, and it’s something that’s very close to mine and Brad’s hearts. So we knew that if we were starting a business that we could make an impact and ensure that some of our money went to something good.”

Now in 140 stores nationwide, Phoric is available from select New World, Four Square and Fresh Choice supermarkets as well as independent cafes and convenience stores throughout the upper North Island and South Island.

Despite her busy lifestyle, Holly has the energy to keep going—supported in part by her own product.

“I drink so many Phorics. It’s great. I’m definitely in the right industry.”