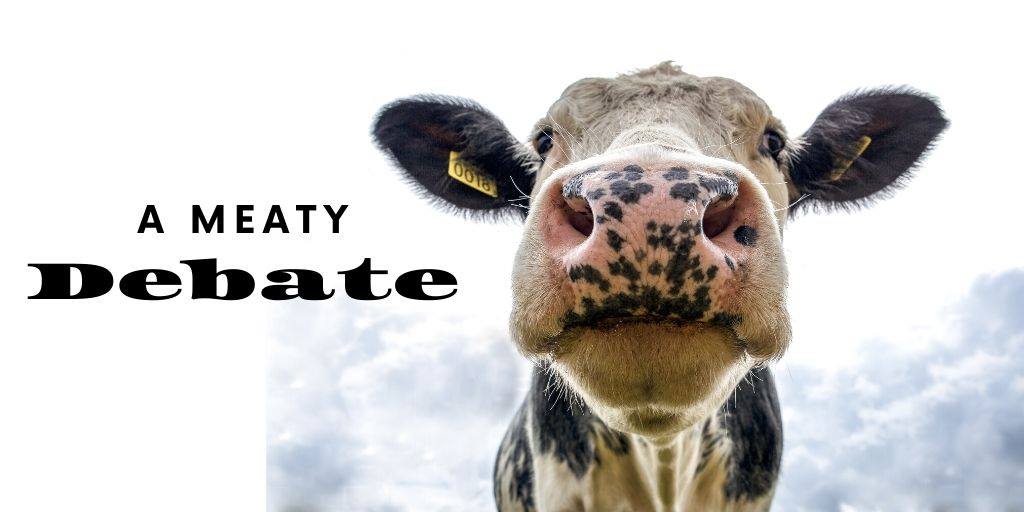 Vicki Ravlich-Horan examines what she eats and its impact on the planet. She asks if continuing to eat animal products is the new version of climate change denial. And is veganism the way forward?

I urge you to read my findings and views and ask your own questions about the very important topic of what you eat, and why, as well as where your food comes from.

According to the Netflix documentary What the Food, I am addicted to cheese. All this time I had been concerned about my need for caffeine at 10am or my desire for a glass of shiraz with dinner and it turns out it was that sneaky creamy, salty feta I sprinkled on my salad that relegated me to  weak-willed addict status.

What the Health is one of the many currently popular ‘documentaries’ promoting plant-based diets. With celebrity backers like Joaquin Phoenix and Leonardo DiCaprio, What the Health was written, produced and directed by Kip Andersen and Keegan Kuhn, who also made the documentary Cowspiracy. If I’m convinced by What the Health’s arguments, I will shun not only the cheese in my diet but the ‘baby cow food’ in my latte, and the wine refined with fish guts, not to mention the steak sitting beside the aforementioned salad (minus the feta, of course). I will do this not only for my health but for the health of the planet.

It’s an emotive and compelling argument and if we aren’t willing to question some of the assertions (like my addiction to cheese) or the pseudo-science (milk causes cancer and eating one egg is the equivalent to smoking five cigarettes), we’ll be easily swayed to swap the cow’s milk for soy, the beef steak for cauliflower and the scrambled eggs for tofu.

So let’s look at some of the issues: a UN report in 2010 warned the rise in meat and dairy consumption, and the predicted growth of the global population to be 9.1 billion by 2050, will mean that a shift to veganism is vital to save the world from climate catastrophe and food shortages. The report says agriculture accounts for 70% of global fresh-water consumption, 38% of total land use and 19% of the world’s greenhouse gas emissions. The gas emissions from agriculture alone are more than that attributed to the world’s entire transport systems or every car, bus, ship, plane and train.

But Fiona Windle, head of nutrition at Beef + Lamb NZ, and Mark Piper, director category, strategy and innovation at Fonterra, both point out farming practices around the world are not all equal.  Says Piper: “New Zealand dairy is 64% more emissions-efficient than the global average. In fact, if a litre of our milk was flown to Ireland, the next most efficient country, it would still record a lower emission profile. If all dairy producers around the world were as efficient as New Zealand, more than half the global emissions for dairy production could be eliminated.”

Windle acknowledges New Zealand sheep and beef production has an environmental impact but adds this is “very different from global figures often cited, which are based on grain-finished product”. She says the New Zealand beef and lamb sector has one of the most efficient, low input, low impact production systems in the world.

There are other factors to consider as well. While the clearing of land and deforestation for livestock is a big concern globally, New Zealand is moving in the opposite direction. Since 1990, the amount of land used in New Zealand for beef and sheep farming has decreased by 34%, or 4.3 million ha.  Of this, 3.3 million ha has gone back into forestry.

The greenhouse gas emissions from sheep and beef farming in New Zealand have been reduced by 30% since 1990, making this sector the only one meeting the country’s global climate change commitment.

The difference in New Zealand farming systems compared with those worldwide is also significant when weighing up not just what we eat, but where it comes from. David Barnes, general manager of New Zealand Pork, says 60% of pork consumed in New Zealand is imported, none of it from countries whose production practices meets New Zealand legal requirements in all respects.

This is huge, especially when you look at how much pork we eat, an average of 23.46kgs a year (up from 13.2kgs 30 years ago). Says Barnes: “Our farming practices are world-leading in areas such as animal welfare and environment, and no other country meets our welfare standards.”

Just as all farming practices are not the same, neither is all meat. Pigs and chickens are monogastric, meaning they only have one stomach and don’t create methane. This is good news if you look at New Zealand’s meat consumption over the past 30 years. We now eat 44.8kgs per person of chicken a year compared to 16.8kgs in 1990. In contrast, beef consumption (17.4kg down from 31.3kgs in 1990) and lamb/mutton (now only 5.9kgs compared to 29.1kgs in 1990) have both reduced substantially.

Chicken is now the country’s most popular meat, accounting for nearly half of the meat we eat.  From an environmental viewpoint it is possibly also one of the most efficient meats to raise.  According to the Poultry Industry Association of New Zealand, the feed conversion rate for chickens is less than 1.4kgs of feed per 1kg of meat produced while water usage is also very low.

Water use is another significant point. Fiona Windle highlights that 99% of water used to produce sheep and beef is rain that falls from the sky. “Crops, plants and horticulture rely on significant amounts of irrigation. If we were to increase production of horticulture in New Zealand, there would be a major increase in the need for irrigation.

“Sustainability is unique to each food production system and country,” she says. “What is sustainable in some countries is not as sustainable in others.” New Zealand may do well to keep this in mind as it expands dairy production in areas where it is not sustainable. Dairy farming uses 44% of all irrigated water in New Zealand, the majority of this in Canterbury and Otago, while in the Waikato and Taranaki almost all the water comes from rain.

Another thing to consider: a growing alternative to cow’s milk is almond milk, with 80% of the world’s almonds grown in drought-prone California. Demand for almonds continues to grow with production tripling in the decade 2000–2017, despite prices skyrocketing.

It takes a staggering four litres of water to produce one almond, and more and more of that water is being pumped from aquafers and rivers. The flow-on effect of this is record low river levels endangering local wildlife such as salmon.

So is shunning grass-fed dairy efficiently produced in New Zealand for almonds grown in parched America, sprayed with all manner of pesticides, then packaged in 100% non-recyclable tetra packs and shipped to New Zealand really a better option?

If we want to eat food that is good for us, and the planet, perhaps eating local and encouraging our farmers, who are leading the world in sustainable practices, is the conscious choice we need to make.

But it is a good source of protein; 85g of lean beef gives you 25g of protein, the same amount of protein from tofu requires one and a half cups and from black beans three and a half cups. Animal products are the only source of vitamin B12, which plays a key role in maintaining the brain and nervous system.

And despite Popeye’s penchant for spinach, red meat is a better source of iron. It’s interesting to note that as red meat consumption has declined in New Zealand, hospitalisation and treatment for the iron deficiency anaemia has increased (the cost to the taxpayer rising from $3.2 million to $6.7 million in the past 10 years).

Harvard University biological anthropologist Richard Wrangham argued in his book Catching Fire: How Cooking Made Us Human (2009) that cooking food was the catalyst that tripped our primitive genes into our current ones. He argues, convincingly, that once human beings could cook food, we could consume calorie-dense food like meat, which grew our brains and improved our health.

So if cutting down on meat consumption is a vital step in sustaining a growing world population, are so-called fake meats the alternative? Or should we eat what two billion people already do—insects?

It takes half as much food to grow a kilo of cricket protein as it does to raise the equivalent in chicken. While that sounds compelling, Josh Evans, lead researcher for the Nordic Food Lab, a not-for-profit organisation established by chef Rene Redzepi of Copenhagen’s Noma restaurant fame, believes that for those of us who have not grown up eating insects, their greatest value is “as a provocation to mindful eating—they force us to consider what we do eat, what we don’t, and why”.

This is a great point because some experts believe if we actually start farming crickets or other insects, like we do chickens, the environmental impact would be similar. In other words, it’s not the end product that is to blame but the system that created it.

And this: as an advocate for eating real food, I’m concerned by fake or lab-grown meat. We live in a time when we are overfed but undernourished, and this can be attributed to us disassociating with our food, and blindly buying packets with ingredients we don’t recognise or understand. The era of eating processed food has not treated us well, so why would we invest further in this model to create fake meat?

The answer, I believe, lies not in further removing us from our food but empowering us to know more and to understand the key role it plays in our health, and the environment as well as our political and social systems. 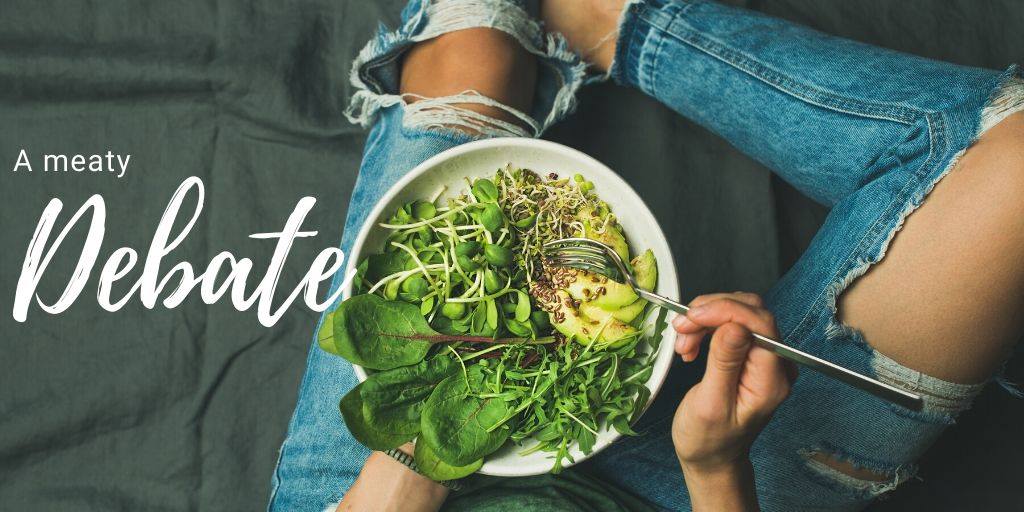 A plant-based diet may well be a great decision, but it will not solve the world’s problems. Land will continue to be cleared, maybe not for agriculture but for crops like palm oil. Biodiversity will continue to be lost, and our reliance on pesticides will increase along with a greater need for irrigation. All this while big problems like food waste continue.

Currently, every year, 1.3 billion tonnes of food produced is never eaten. This is not just a waste of vital ingredients but a waste of the resources it took to grow them as well as transport and (often) package them. While we worry about how to feed the soon to be 9 billion people, we throw away one-third of the food produced worldwide, more than enough to feed everyone. We worry about water resources, yet we throw away 25% of what we use with all that wasted food. If food waste was a country it would be the third largest emitter of greenhouse gases. And, interestingly, of the top 10 foods we waste, seven of them are plant-based (bread, oranges, apples, bananas, potatoes, rice and lettuce).

I was at a conference last year when a farmer began his speech with the line, “I am a farmer and I pollute.” It was an honest and brave admission but not one that farmers, especially agricultural ones, should bear alone.

I am a person. I pollute. But I will continue to research and debate these issues, shop and eat local whenever I can, turn my squishy bananas into muffins, and remain mindful of my place on our precious planet.